Where to stay in Stockholm-Stockholm vacation rentals

All travelers who have already enjoyed Sweden perfectly know that it is definitely not the cheapest place in the world. That is why when speaking about where to stay in Stockholm we say there are several kinds of Stockholm accomodation – more affordable hostels, rather costly hotels and luxurious hotels and apartments.
If you don’t want to pay too much
Not everybody wants and can find enough funds for places to stay in Stockholm like a prestigious hotel – for example Park Inn or Scandic. Such tourists are usually not interested in luxe – they feel totally fine with any cheaper Stockholm b&b. All savers and young students prefer to find something more affordable. Luckily, serious competition about Stockholm hotels makes them provide some discounts and exclusive offers – take the advantage of it if you don’t like hostels but don’t want to give much money.
There are a lot of tiny hotels made in that fantastic Swedish style. The chance to chance upon a discount and reserve a nice room for cheap is very high. If hostels typically look similar to each other in entire Europe and even the world the hotels are always different and thus much more beautiful.

What about staying on a ship?

What about staying on a ship?
On the map we can see that actually cheap accomodation in Stockholm is situated close to water. It is the reason for people calling it “Northern Venetia”. All ship hotels can be found in the heart of Stockholm so a tourist will have everything close. Finally, the biggest advantage is that the ships appear to be much more affordable than ordinary hotels. What a nice accommodation in Stockholm, isn’t it?.
Experienced tourists claim that staying in a ship is actually much better than in any “land hotel”. According to their words, the ships are indeed located quite close to the center. So you will get both available price and small distance to dozens of fabulous attractions.
Be a Swedish
If you like more comfort and freedom you could check rental apartments or houses. That’s relatively expensive choice, but you need to keep in mind that the average wage and pension in Sweden is nearly the highest in the whole world. It means that local people are not afraid of such prices, but foreign tourists are usually disappointed.
But much more affordable houses and apartments may be found in the city outskirts. You will then cut expenses and see better how Stockholm people live. With no doubts, such experience is very useful. It will let you compare ordinary districts to the touristic part of Stockholm too.
Rental apartments and houses suit well tourists who are not obsessed with attending each and every attraction. Each city always has two sides and Stockholm is not exclusion here. If you wish to get the full picture – live side by side with locals but not with tourists.
When comfort is important
Certain tourists, however, prefer staying in total comfort. A prestigious hotel with big and clean rooms and delicious breakfasts are the best choice then. Global hotel companies are widely presented in Stockholm. Local hotel chains can be interesting as well. Small local hotels could also be luxurious and comfortable enough to come up to all your expectations.
Grand Hotel is possibly the best spot where a wealthy tourist could put up at since this hotel is situated right in the very center of the Swedish capital. You will be able to walk to the majority of attractions from the hotel. The only disadvantage is that the prices for rooms are higher than in other Western cities.
Find your couch
One is better to search for bed and breakfast in Stockholm in hotels and hostels. The people who like travel independently will rather choose a free option called “couchsurfing”. There you will meet thousands of hospitable people from various countries and towns including, of course, Stockholm who are inviting everybody to stay. There is nothing complicated at all – register an Couchsurfing account and find a host in Stockholm. That is how you will not only explore this fantastic city but also meet dozens of new people. 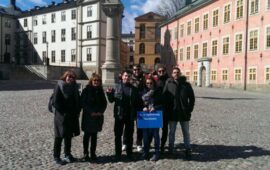 Segway Stockholm -What Time Is In Stockholm Right Now

The holidays 3 hostels in Stockholm