Where to stay in Stockholm-travel to Sweden

All people who have already enjoyed Sweden and Scandinavia say that it’s certainly not the cheapest place in Europe. To sum up and be brief we’d like to say that those who are looking for where to stay in Stockholm or Stockholm accomodation could select among the following variants – more or less cheap (hostels, ships), moderately expensive (hotels) and finally really expensive (luxurious hotels).
Saving solution
Well, Sheraton, Scandic or Radisson are rather not appropriate places to stay in Stockholm for students and for thrifty tourists. The main aim for such kind of people is to explore the Swedish capital and to see as much as possible, they are not confined to a exact Stockholm b&b place. All money savers and students prefer to find a cheaper place. There are a lot of great hostels in Stockholm, but we recommend you to check available hotel rooms.
There are a lot of tiny hotels made in that charming Swedish style and design. The best thing about such places is that sometimes they present incredibly tempting price offers like seasonal offers and various discounts. The ultimate argument is that it is far more enjoyable to live in a place built and arranged in the traditional Scandinavian style than in a hostel tends to look exactly like all other hostels.

Check out a ship hotel
Those who know geography know that Swedish capitan is an island city and cheap accomodation in Stockholm can be found on ships. Right, that’s why people call Stockholm “Northern Venetia”. All ship hotels are situated in the central part of Stockholm so you will have everything close. There are both cheaper hotels and hostels in such ships beginning with 20 Euros for a room. What a nice accommodation in Stockholm, isn’t it?.
Experienced tourists also claim that staying in a ship is actually much better and cheaper than in any “land hotel”. According to the tourists’ words, the ships are indeed located near the center. It means that you will not be living in a cool place but also have all main attraction sites right near.
Feel the life of a Stockholm inhabitant
Another option is to rent an apartment or a house. But be ready for rather expensive offers – keep in mind that wages and pension in Sweden are high and local inhabitants can afford such rent. It means that locals are OK with such prices, but foreign visitors are usually disappointed.
But much cheaper apartments can be found in the outskirts. You will then cut expenses and see how Stockholm people live. That’s an awesome experience as well. Moreover it is the best chance to compare city center with other areas.
Rental apartments and houses suit well visitors who are not obsessed with attending each and every attraction. There are many cool things in non-touristic districts too. That is how you can get the complete view of Stockholm.
Luxury and comfort
Anyway, some people need top level of comfort. You can get all of this only in a four or five star hotel. Global hotel chains can be easily found in Stockholm. It could be a nice idea to check out local Stockholm hotel chains too. One more option of a comfortable rest is to rent a room in an original Swedish hotel.
Grand Hotel is probably the greatest spot where a wealthy tourist could put up at since this hotel is situated in the very center of the city. Historical places, museums, restaurants – everything is situated within a walking distance from Grand Hotel. But keep in mind really high prices – they can appear to be even higher than in most of other Western capitals.
Find new friends and a new couch
Surely, only traditional places like hotels and some hostels offer bed and breakfast in Stockholm. But still, there is a different way to find a place for sociable people – an online service called Couchsurfing. It’s really easy to find a “coach” in Stockholm even if you have never done it before. It’s incredibly simple – make your profile on Couchsurfing, find a citizen from Stockholm and send a message to him. That is how you will not only learn more about this marvelous city but also make new acquaintances.

Bed and breakfast in Stockholm-Stockholm to do

Free tours-what to do in Stockholm 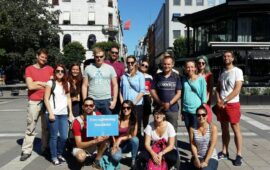 Notes and Facts About The Stockholm Card